You are here: Home / Maritime / What is an Allision?

The nautical definition of an allision is “the running of one ship upon another ship that is stationary.” The distinction between it and a ‘collision’ is that in the latter, both ships are moving. Landlubbers might think that the likelihood of two vessels crashing on anything in the vastness of the sea is nearly impossible. But these incidents happen fairly often and they can have a far-reaching impact. This is in spite of modern global positioning systems (GPS) and other navigation aids. Sometimes they happen when someone breaks the Rules of Navigation. In other instances, it’s a bad judgment call.

Another difference that sets a collision and an allision apart is the issue of finding fault. Sometimes determining who caused a collision is obvious, such as when the person operating one boat is under the influence. Like roads, waterways have speed limits that drivers must heed. Failing to obey the laws puts the fault of the collision on the skipper of one of the vessels.

In most cases, assigning fault is not as easy. Even in open waters and in broad daylight, collisions still occur. Sometimes the skipper isn’t paying enough attention, or the skipper thinks he has the right of way. In the end, no one gives way to the other boat and the situation ends in disaster. How Is Fault Determined in a Collision?

In the past, the distinction between ‘privileged’ and ‘burdened’ vessels determined who had the right-of-way when two vessels met or crossed on the water. The distinction was meant as a way to prevent collisions, not as a means of determining guilt when a crash happened.

Both vessels are equally responsible for avoiding collisions. To help clarify this, the terms used today are different. The terms ‘stand-on’ and ‘give-way’ are clearer in that they reflect the action that boats are expected to follow. If the skipper in the ‘give-way’ vessel doesn’t take action for any reason, the skipper of the stand-on vessel is expected to take steps to prevent an impending collision. When the ‘stand-on’ vessel doesn’t follow the rule and take the necessary action to prevent the collision, the skipper is just as much at fault as the skipper of the ‘give-way’ vessel.

Two commercial ships, a steamer and a sailing vessel, collided off the New Jersey Coast. The sailing vessel sank, resulting in the drowning of six of the ten crew members onboard. When the owner of the sailing vessel sued the steamer for damages, the case was heard before the US District Court of New York and the Second Circuit. Both found the steamer at fault because it was traveling at excessive speeds.

The case later went before the Supreme Court, resulting in a somewhat different decision. The Supreme Court also found the sailing vessel partly at fault because they were violating a statutory rule designed to prevent collisions and an allision, which was in place at the time. There was a dense fog when the collision occurred, calling for the sailing vessel to blow a fog horn. Since they only rang their bell, the court considered the violation of the statutory rule as a contributory act.

That isn’t to say that the second vessel will be held at fault if their breaking the rule didn’t contribute to the accident. The burden of proof on the ship is not to create doubt. It is to prove that the breaking of the rule could not have been the cause of the collision.

Allision, Liability, and the Oregon Rule

One example of this rule in play is the 2013 ruling on the Mike Hooks Dredging Vs Marquette Transportation Gulf-Inland LLC case. A passing vessel, the Pat McDaniel, hit a moored dredge owned by Mike Hooks Dredging along the narrow Wax Lake intersection, which was undergoing repairs. Since Navigation Rule 9 prohibits mooring in a narrow channel, The Pennsylvania Rule was called into play. That move shifted the burden of proof to Mike Hooks. Hooks failed to rebut the presumption of causation, resulting in the district court’s decision that he was partially liable. In the end, the court assigned 70% of the liability to Mike Hooks and 30% to Pat McDaniel.

Allisions have the potential to cause a broad range of damages, both to the ship and to the crew. Several factors determine the extent of the damage, including the size of both vessels and how fast the moving vessel was traveling. The person or company who is responsible for the allision is also liable for any damages.

Determining damages to the boat depends on whether it is deemed a partial or total loss. A partial loss means that the damage can be repaired and returned to seaworthy status. The damages, in this case, include the cost of repairs. If the boat is still seaworthy after the impact and the owner chooses not to have the boat repaired, the damages are equal to the loss of value the damage caused. In addition, the owner will receive compensation for the loss of earnings experienced during the repairs. Other incidental costs such as salvage are also recoverable.

If it is a total loss, the damages include the value of the vessel at the time, along with several other charges including the cost of cleaning up the freight and pollution and the removal of the damaged boat. Recovery for the loss of earnings and detentions isn’t permitted with a total loss.

Another reason that liability matters is the cost of treating injuries that result. Depending on the impact, injuries to the crew members can be serious. Most men and women who work on the sea are protected under the Jones Act. The law protects injured seamen and allows them to sue their employer when their employer’s negligence causes their injury.

The Jones Act provides seamen with three fundamental rights, including:

The right to receive maintenance and cure. Maintenance is a daily payment to help you with daily living expenses. The cure is your employer’s obligation to provide medical care while you recover from your injury. Failing to provide maintenance & cure or an attempt to delay or lower payments can result in your obtaining additional compensation. You aren’t obligated to prove that your employer or anyone else was negligent to get maintenance & cure. If your injury occurred during your service of the vessel, you have the legal right of maintenance and cure.

2. The Right to Sue Their Employer

3. The Right to Sue the Ship Owner

The right to sue the ship owner for unseaworthiness if the condition of the ship contributed to their injury. This right holds true even if the owner didn’t act negligently. A vessel is deemed unseaworthy if any part of it is not fit for its intended function. It doesn’t mean that it can’t be navigated at all.

The Jones Act is one of the most important of the statutes and federal regulations regarding injuries resulting from allisions. If the accident results in fatalities, the Death of the High Seas Act offers an avenue for the loved ones of the deceased to pursue compensation. The various statutes and laws, each which is opened to interpretation in any situation, makes proving liability more challenging.

Allisions don’t always involve two ships. They can involve any unmoving object, such as a bridge or dock. One example is the case of Bunge Co. v. Freeport Marine Repair. In 2001, a hull (Hull #40) broke loose from its mooring following a hurricane. The vessel was under construction at the time. Breaking loose allowed the hull to float into a grain-loading facility, leading to damages. Although the vessel wasn’t being navigated by a crew, it was in navigable waters. This led to the application of the Louisiana Rule. Like the Oregon Rule, the Louisiana Rule stipulates that the moving vessel that strikes a stationary object is presumed to be at fault.

Allisions also occur when ships crash into oil platforms or drilling rigs. These crashes can cause explosions or fires that result in severe injuries and even death. 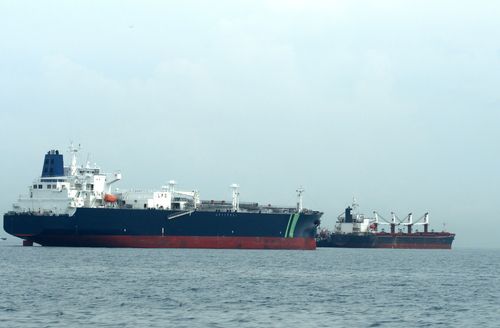 When Allisions Cause Oil Spills

The public usually hears about major oil spills like Deepwater Horizon in 2010 off the Gulf of Mexico. Less often, they hear about the many smaller oil spills and the combined impact they have on the environment. As many as half of the hundreds of oil spills that happen each year are caused by allisions, collisions, and grounding while in open water. When it comes to oil spills that occur inland or on restricted waters, that number rises to about 99%!

Depending on the proximity to land, an oil spill can impact an entire coastline. Oil spills harm mammals, fish, and marine birds. They cause lasting damage to the sensitive aquatic systems, and to the people who depend on them for their livelihood.

The issue of oil spill liability is a complex legal one. As we learned from Deepwater Horizon, the liable party in an oil spill can end up paying many millions of dollars in compensation. The liable party is responsible for paying damages in four areas, including:

When the spill is the result of an allision, determining liability becomes challenging. Some common maritime injuries can occur as a result of the impact. Slips and falls, chemical burns, and falling overboard are just some of the dangers allisions cause when an allision involves hitting oil rigs or platforms.

It takes an experienced maritime personal injury attorney to represent clients using every law to their advantage. Seamen typically experience injuries that are more severe than what workers may face on land. They work in one of the most hazardous environments there is. There’s always the potential for injuries from the equipment and tools they work with, let alone from the impact of an allision. They shouldn’t have to suffer the consequences of another person’s negligence. When they do, they deserve compensation for their injuries.

If you have suffered an injury at sea, contact Naylor Law for a free case evaluation today. We have more than 40 years of experience helping injured maritime workers and cruise ship passengers get help and compensation for their injuries. Don’t try to understand the complex world of maritime law on your own. Get the representation you need to navigate these complex legal waters!